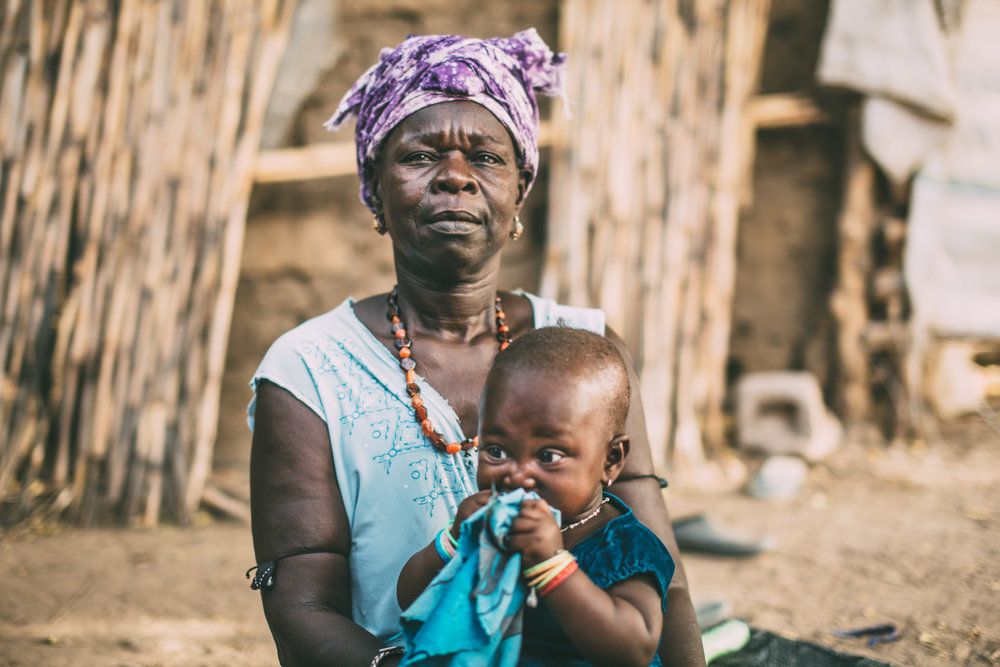 Mission Inter Senegal is the active branch of the Senegalese Evangelical Fellowship, a non-profit organization recognized by the government. MIS seeks to send out national missionaries to the towns and villages in the interior of Senegal who are without any Christian witness. As a non-denominational, private association with a holistic approach to ministry, Mission Inter Senegal's main role is to announce the message of Jesus Christ by means of national projects, development and evangelism.

1. Pray for Mission Inter Senegal as the staff works on restructuring and becoming more stable. Pray the Lord would give the Director, Adama Sene, the skills needed to lead well.

2. Pray for the village of Ngonine, its Pastor Timothy and his assistant Saliou Kama. Pray they would have a good working relationship to minister to the village. Pray Timothy would preach the gospel boldly and for God to provide more funding for Saliou to stay in the village and provide for his family.
3. Pray for the neighboring village of Koberhan and the believers there. Pray they would grow in their knowledge and faith and more people would come to learn of God's love in both villages.

As always, this year’s trip to Senegal was a huge blessing.  Each of the team members (except for one) were returning members which just speaks to the commitment, impact, and importance of this mission.  Logistically it was a blessing to have the support of Matt Toombs from United World Missions to not only come alongside Mission Inter Senegal in team acquisition from the airport, but to help us orient in country, debrief at the end of the trip, and also spend time with the team and share how God has been moving in Senegal.  Our accommodations this year at Crossiant Magique, although unexpected, was a welcomed change.  It offered another perspective on Senegalese hotel culture, afforded a sense of safety as the hotel had security guards who were very welcoming to us, and was in the center of the city and provided the opportunity for us as a team to navigate on foot around the surrounding neighborhood.

We had a short day of rest and orientation Wednesday before heading out to N’gonine on Thursday.  This, again, allowed us to spend enough time acclimating to the heat and culture, but also ample time in the village.  Thursday in the village consisted of hanging out with kids, visiting the chief, and some hut to hut visits as well as a movie at sunset.  Friday was medical clinic, where we were able to see over 250 residents of N’gonine.  Of note God provided the medical practitioners the vision to identify a young boy with possible appendicitis for whom Jules Caho was able to bring to Bartimee hospital in Thies for further evaluation.  Dr. Carnuccio was also able to care for a young boy who came to clinic with a significant foot wound and abscess.  With the help of Fred Wurster (paramedic) and Adrianne Lake (registered nurse), Dr. Carnuccio was able to lance the abscess, drain and clean it, pack the wound, provide antibiotics, and provide teaching to his mother to care for it overnight and with directions to bring him for re evaluation the following day. By the grace of God, the boy and his mother came to the neighboring village Koberhan the following day for reevaluation.  He was able to walk into this clinic because the inflammation had decreased so much and when the packing was removed, a clean wound was revealed.  Again, Dr. Carnuccio was able to address the wound, provide management techniques to the boy’s mother and rewrap it so he could walk out of the clinic on his own.  We are giving praises that since the clinic we have also received word from Pastor Timothy Ousman N’dour that the boy continues to progress without known issue.

A favorite tradition called the “naming ceremony” took place Friday evening after sunset.  Each of the returning team members got the opportunity to dance alongside their namesake from the village.  Joseph Vegso was also blessed to receive a namesake and dance with him for the first time.  It was a wonderful celebration of friendship among two different cultures.

Saturday the team spent the day in Koberhan where a medical clinic was held.  On the way they happened upon Dr. Ndiaye who was holding a vet clinic in N’gonine. With the help of the team from Bartimee Hospital they were able to evaluate over 175 people.  After clinic the team was invited to spend the day in “Uncle Joe” (a village elder from Koberhan’s) compound.  The men of then team spent time with “Uncle Joe” and some other elders in the shade of the trees resting and learning more about one another.  The women of the team had the pleasure of spending the afternoon sitting with the women who were preparing meals, by peeling and cutting onions and other vegetables for hours. The team enjoyed 2 meals with the families in the compound.  Some of the team members also played a game of “Jeff says” (Simon says) or “Jeff Katee” (sp?) with the help of Benoit (pastor Benoit from Bombay) nephew and 2 female teenagers from Koberhan that help monitor the children in the choir during the shared worship time with N’gonine.  They also helped the kids decorate tee shirts.  That evening the “Jesus” film was shown in Koberhan.  Before leaving the women from the team were able to help dispense some soap to the women in the compound.  Sara Dill shared a prayer with them and reminded them that Jesus could wash away their sins with his blood.

Sunday there was a really nice worship service.  Many members from N’gonine, as well as a contingency from Koberhan, and Pastor Benoit from Bombay all attended.  Benjamin Ngom (Antione Dione’s nephew) and Gerard Kama (Pastor Beniot’s son) came to help with Sunday Worship and the kids choir.  The team prepared a song to sing at the service.  Eric Bender played guitar as the team sang “Oh Come to the Altar”. A real highlight of the worship service was the  message delivered by Pastor Timothy Ousmane N’dour.  I truly has been such a blessing to witness him grow in his faith, knowledge of the bible, and boldness in challenging the community of N’gonine to seek The Lord, and not just passively standby.

After the service a lunch was shared with all attendees including those from Koberhan.  Following completion of lunch the women of the team organized a time with women from N’gonine to share a snack of canned fruit, party mix and a prayer.  Francesca Carnuccio and Adrianne Lake prayed with the women and reminded them that God loves them.  All of the women who attended and many of the young girls then hung out and participated in nail painting with various polishes.  Around 3pm the team packed up and headed back to Thies.

That evening the team was blessed by a dinner at Adama Etienne and Marie Sene’s home.  Joining was also Analese, an intern from an AV church partner in Connecticut named Sirena, the Sene’s children, and Yaya Diarra (logistics for MIS) and his new wife Elizabeth.  It really was a nice time to connect with Etienne’s family and pray for them.

Monday the team headed into a neighborhood in Thies to meet with Oustass Cisse and hold medical clinic with the Talibe boys.  This particular Maribut was one whom MIS has developed a good relationship with over the years.  The boys were overall well cared for.  There was one boy with a dislocated shoulder with whom MIS was able to organize an evaluation at Bartimee Hospital to see if he would need any type of surgical intervention.  Overall, the team from the US and Bartimee were able to see over 120 boys.  Following the clinic the teams went back to the MIS office and shared a lunch together in fellowship.  It was truly nice to be able to spend even an hour together in hopes to let the MIS team feel how much we really appreciate and support them.

Monday afternoon the team was able to visit with Laurie and Phillipe Sadio and their children before heading to William Kalamo (Accountant for MIS) home for dinner.  The time with William was TRULY a blessing.  He is someone who has been involved with MIS for over 15 years and despite the trials and tribulations with MIS’s growing pains his passion to serve the Senegalese brothers and sisters and to spread the gospel remains very strong.  Getting to spend time with him and learn more about him and his life as well are sharing a fantastic meal prepared by his wife Aliane (sp?) and daughter was so special.

Tuesday the team were joined by Matt Toombs again and ventured to the Reserve de Bandia for a Senegalese Safari.  The safari gave the team a further appreciation for the flora and fauna or Senegal. After the safari the team went and had some debrief and down time at Beacon of Hope in Dakar.  Dinner was spent at BOH along with some more debriefing with Matt Toombs.  Afterwards, Malle Ndao (logistics associate) shared his testimony with the team.  His faith and trust in God were truly inspirational.

Wednesday the team spent the morning at Gore Island, afternoon at BOH, and then dinner at a Brazilian Restaurant in Dakar where former Talibe young men are employed. After the team headed to t he airport for departure.

Overall, this trip was truly a blessing for the US team.  From continued support from Mangoni Diop (transportation), Marra (transportation associate), Charles (translation), Tovah and Uriel (translators), Samuel (translator), Jean Baptist Mendy (translator), seeing Jules Caho working so passionately to help the MIS staff members like Mama Astou, Malle, William Kalamo,  Yaya, Clement, Babacar, Adama Etienne, and spending time with William Caho this trip will be memorable for years to come. Prayer requests would be for the continued growth of Timothy and his counterpart Saliou Kama to strengthen their leadership in N’gonine, the continued outreach in Koberhan, the completion of the garden project in N’gonine, the health of MIS and all other supportive organizations.